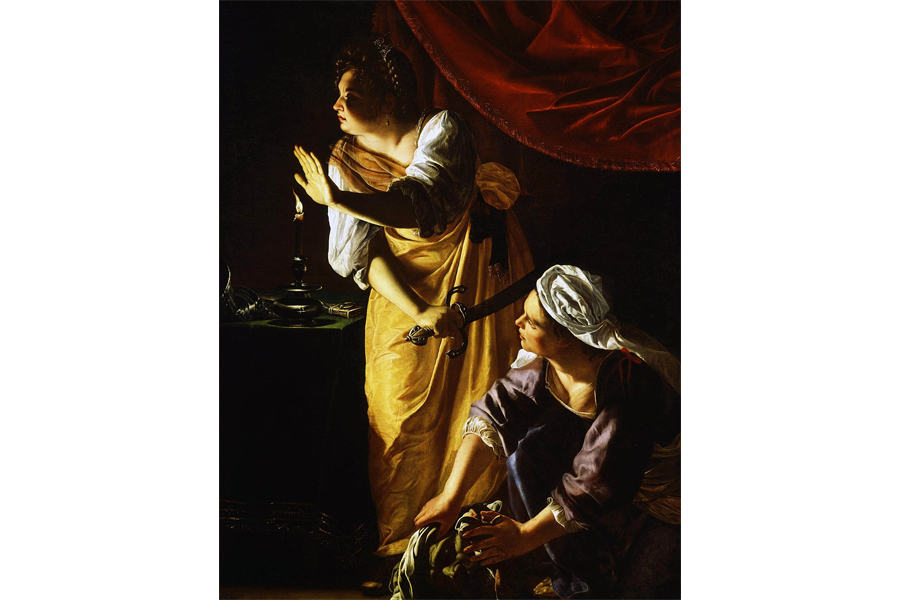 If you wander through most museums, you might get the mistaken idea that only men painted in the 1600s. Nothing is further from the truth. There were many quite talented female painters, both then and now. The challenge was (and is) to have those women’s paintings hang on a wall and be respected.

Artemisia Gentileschi was a woman who pushed up against those barriers.

Born in 1593, Artemisia was fortunate enough to be born to a talented painter. He encouraged her in her pursuits even though she was a mere girl-child. She did have brothers, but she was the one who showed her talent and was recognized for it. Her mother passed away when Artemisia was 12, so this male-oriented world was the one she lived in.

Artemisia’s father was incredibly proud of her, and made sure other painters knew about her. Even in her teen years, she was recognized for her skill with the brush. At this time period Caravaggio was very famous, with his intense use of darks and lights. So it makes sense that her own paintings went in this direction. At the same time, she focused heavily on painting women and their situations. This probably also brought her respect, as people felt it was natural and right for her to be so good with this topic area.

Unfortunately, one of her father’s partners, Agstino Tassi, raped her. At this time period a woman who was raped was “soiled” unless the rapist then married her, at which point it was considered (sadly) fairly normal. So Artemisia waited nine months – and allowed him to keep having sex with her – hoping he’d marry her. But it turns out Tassi was a pretty foul man and had committed many other crimes. So Artemisia and her father took him to court and Tassi was exiled from Rome.

Fortunately, Artemisia did find someone to marry, a fellow painter, and they were encouraging of each other. Artemisia had a daughter and that daughter was also encouraged to paint.

It’s encouraging to think that Artemisia did indeed get acclaim in her lifetime for her great works. It’s sad, though, that she only earned that through the steadfast support of her father, a well-known painter, and through the support of her painter-husband. There were countless other women who were talented painters during this time period whose talents were actively squashed and rejected. We are fortunate to have Artemisia’s works to inspire us.