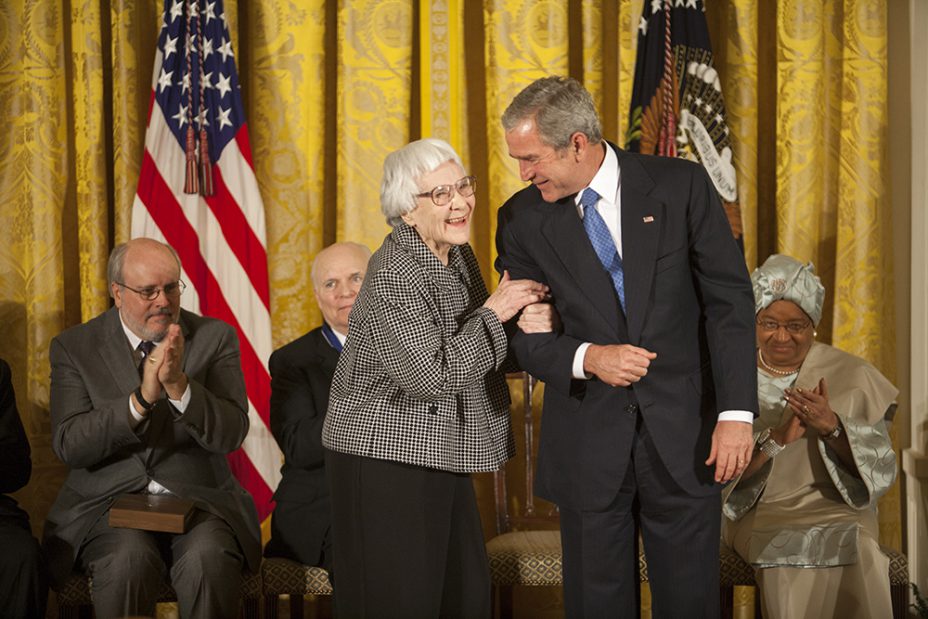 Sometimes we wonder why there weren’t more women novelists in the earlier parts of America’s history. And then we have situations like Harper Lee, where even now many people mistakenly think she must have been male to have written such a powerful novel about race and class. They’re surprised to learn “Harper” was a woman.

Harper Lee was born in 1926 in Alabama. Harper Lee was her pen name, maybe chosen for the very reason stated above – that it was ambiguous enough to let people judge her work on its merit alone. Her given first name, and the one she used in normal life, was Nelle.

In a time period where many women were pushed into becoming housewives, Nelle’s father was a lawyer and actively encouraged his young daughter to follow in his footsteps. But she heard a different calling.

Nelle wrote this story authentically, based on her own life and experiences. That explains why it resonates so fully. Her own father had defended a father-and-son African-American duo who were accused of killing a white man. The pair were hung.

Her sister’s middle name was Finch. She actually knew a man like Boo in her neighborhood. She wove these experiences into her story.

Nelle was 33 before she finished writing her book. She got so frustrated with it that she tossed the entire thing into the snow. Luckily, she then retrieved it.

The book became an enormous success, and Nelle was overwhelmed. She was by nature a shy person. Still, she was very pleased with the film version and was involved in making sure it maintained the true nature of her story.

Nelle remains an inspiration to us all, to write from the heart. Write what you know. Bring that unique, personal vision out to the world, so they can learn and expand their experiences.

White House photo of Harper Lee taken by Eric Draper and in the public domain. Sourced from Wikipedia: