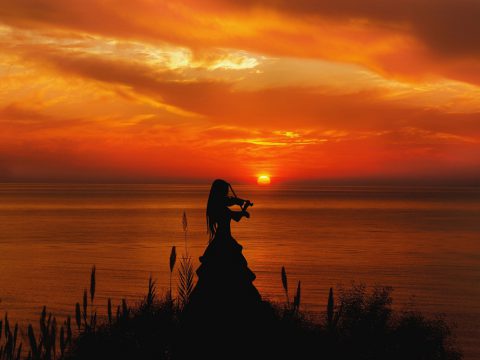 Go ahead, name a classical composer that’s well known. You might come up with Beethoven and Brahms, Mozart and Tchaikovsky. But for most people, naming a female classical composer is nearly impossible. It’s a trivia game question that you might know just out of chance. Going to a music store, the shelves are lined with sheet music bearing male names. Good luck finding a female.

But why is this? We know women are just as talented at writing and playing music as men are. Could there truly be no women in the classical composing centuries who was found worthy of publishing?

The answer, as you might guess, had to do with society.

Let’s look at the book Clara by Janice Galloway. Clara Schumann was born in 1819. Women of this era were supposed to be paragons of the gentle arts. Talented in painting, but not too talented. Well versed on the piano, but of course not stage-worthy. They were supported to be pretty accents. Clara’s father was Friedrick Wieck, a top piano teacher, so he had every intention of turning his daughter into one of those “perfect for social event” players.

Unfortunately for Friedrick, Clara fell in love with one of his piano students, and he was furious. He even took them to court to stop them. But Clara and Friedrick wed. And, as it turns out, maybe Dad was right. Because Friedrick mistreated Clara. She sublimated her talent for him. She wrote, I once believed that I possessed creative talent, but I have given up this idea; a woman must not desire to compose – there has never yet been one able to do it. Should I expect to be the one?

This was how life was for women back then. To be without talent was to be shamed – but it was all to be held within limits. The men were the great artists. The great composers. The politicians and writers. Women? They could dabble – wasn’t that cute of them? But their primary role was to gaze adoringly up at their husband and to keep the children quiet.

“Should I expect to be the one?”

Thankfully, in modern times we have more examples to inspire our young girls. And many symphonies had to go to blind auditions – where the player is not seen in any way – to guarantee that their musical talents were judged wholly without bias. We’re making progress, but as the Placido Domingo sexual harassment charges show us, we still aren’t in a place where women are treated equally and with respect.